The Private Memoirs and Confessions of a Justified Sinner
James Hogg 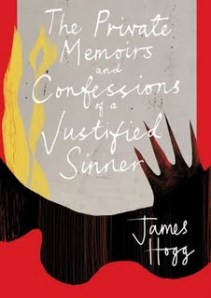 Cover from a design by Cate James
(www.catejames-illustration.com)

The Private Memoirs and Confessions of a Justified Sinner is a brutal portrayal of a young man’s murderous actions while consumed by evil thoughts. Set in 18th-century Scotland, under the influence of a shadowy stranger known as Gil-Martin, Robert Wringham is convinced his actions are unanswerable to man’s justice and are true to the sanctity of God.

Hogg’s work is undoubtedly controversial, yet it still remains a masterpiece of Scottish fiction, representing the deepest darkest aspects of human emotion – where evil in the mind and soul masquerades as religious faith in the human psychosis.

This book is now out of print and no longer included in our Books to Bairns initiative.